The JP2 Foundation will be commemorating the Liturgical Feast of Saint John Paul II on Saturday 21st October 2017 with a High Mass celebrated by Bishop Mario Grech followed by a concert of Sacred Music by St Teresa’s Effingham Choir from the UK . The choir will also be animating the 6.30pm Mass live broadcasted on TVM2. 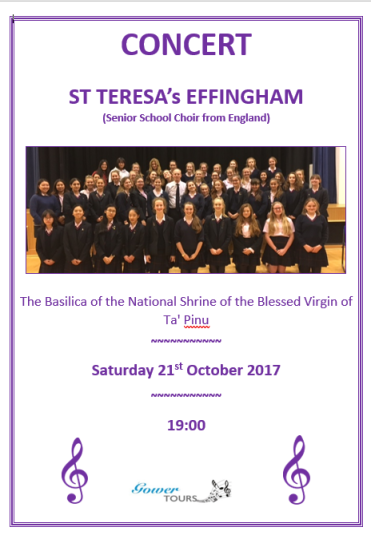 St Teresa’s Effingham is situated in the Surrey Hills near Dorking.  There are at present 420 girls attending the school, both boarding and day pupils. The school has an impressive tradition of excellence in music, art, drama and sport. The choir holds 45 female voices.

The members of the choirs love singing and performing. They have been guest performers at the Mole Valley Youth Show Case at the Dorking Halls. Previous tours include Venice, performing in St Mark’s Cathedral, Notre Dame Cathedral in Paris, Verona, Florence, and last year the choir enjoyed visiting Sicily. The choir also appears regularly in the Godalming festival.

Timothy Caister is the Director of Music at St Teresa’s Effingham, and is also a profession musician. He is currently the sub-pricipal french horn player in the City of London Sinfonia.

The commemorating event will take place at Our Lady of Ta’ Pinu Basilica, Gharb, which Basilica was visited by Pope John Paul II on the 26th May 1990. The general Public is invited to attend.